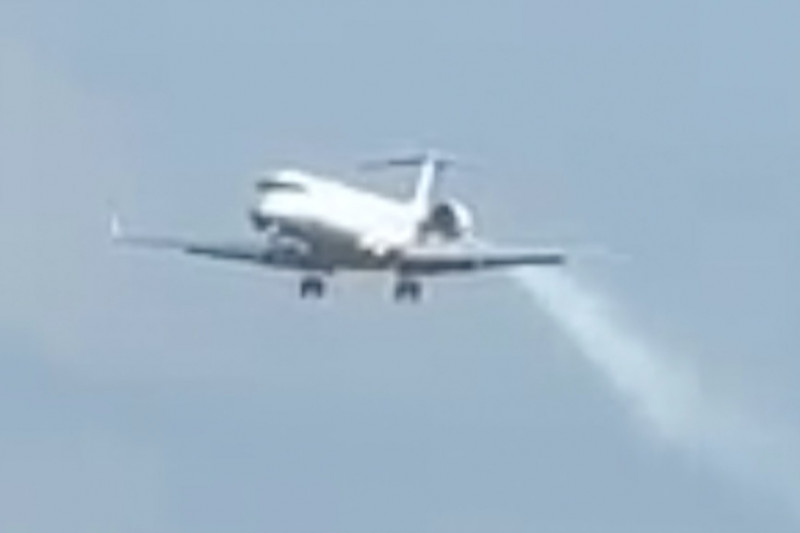 August 1, 2021 - Rochester Airport Firefighters responded for an Alert 2 after being notified of a CRJ-7 diverting to ROC reporting a fuel leak with 54 souls on board, and 2,100 pounds of fuel remaining - incorrectly relayed as 21,000 pounds. As Firefighters positioned along the runway to await the its arrival, ROC’s Air Traffic Controllers guided the aircraft to land on Runway 4. As the pilots began their final approach, it became obvious that the leak was a significant one due to the fuel spilling out of the left engine giving the aircraft what looked like a long vapor trail.

Upon landing safely and stopping on the runway, the professional Firefighters of ROC airport immediately surrounded the aircraft to protect the passengers and crew on board. In order to prevent a fire, the crew was told to shut down both engines as there was still a significant amount of fuel spilling onto the runway. Unfortunately, the APU also needed to be shut down meaning comfort controls were powered down with it, likely causing some uncomfortable conditions onboard the aircraft. Due to temperatures at the time, the decision was made to hold off on covering the fuel with AFFF foam and instead cover it with absorbent material including dry sand provided by Airport Operations.

Once the leaked fuel was sufficiently covered to eliminate the vapors and prevent a likely ignition, Airport Firefighters assisted in calmly evacuating the passengers and crew to waiting shuttle buses so they could be transferred to the terminal. During the evacuation, a Monroe Ambulance was brought out the to the scene to provide medical coverage for all involved. Once the fuel leak was mitigated all the passengers and crew were evacuated to the terminal, Airport Operations coordinated the response of a tug so the aircraft could be towed to a safe area. Once it was parked, Airport Firefighters once again evaluated the engines for leaking fuel. Finding no further need for a fire response, the aircraft was turned over to maintenance.

This incident lasted over three hours and required a significant amount of coordination amongst airport personnel. Off-duty Firefighters were recalled to assist with all facets of the operation, including placing Rescue 14 - ROC’s reserve crash truck - in service to maintain fire protection for the airport as multiple aircraft were still landing and taking off throughout the incident. Due to the limited weekend manpower, off-duty Operations personnel were recalled in order to bring a large amount of sand to the scene, drive the shuttle buses which safely evacuated the passengers and crew, and eventually clean up the contaminated material in order to reopen the main runway and return the airport to normal operation.

ROC’s Air Traffic Controllers also played a large role in facilitating communication between the flight and rescue crews while maintaining control over the airfield and coordinating multiple aircraft operations under adverse conditions. The Alert 2 mutual aid response kept a substantial amount of equipment from outside agencies tied up and were released from staging once the incident could be controlled by airport personnel.

The leadership of the Rochester Airport Firefighters Association, IAFF Local 1636 would like to publicly acknowledge all of the agencies and personnel that responded to assist us at this scene. Thank you as well to those individuals that provided the imagery included in this video showing our members at work.