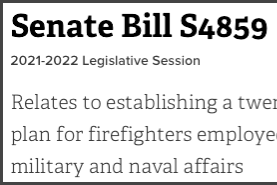 Recently, NY State Governor Kathy Hochul vetoed Senate bill S4859 which would have created a 25 year retirement plan for Firefighters within the NYS Division of Military and Naval Affairs (DMNA). This bill was unanimously passed by members of both the State Senate and Assembly, along with each of the committees assigned to research its impact. We are unsure as to why she vetoed the bill, but the Governor will not feel the ramifications of her action - our brother and sister firefighters will. While firefighters assigned to airports and military bases typically do not experience the same call volume as other municipal Fire Departments - due largely to the highly controlled environments we protect - we still face the same dangers as all other career departments. For that reason alone, DMNA Firefighters should be afforded comparable retirements.

Much like our members, the CSEA-represented Firefighters of the DMNA are responsible for protecting their facilities with extremely limited manpower, yet still provide mutual aid support to their surrounding communities. With approximately 70 total members, they cover Stewart ANGB in Newburgh (which includes Stewart International Airport), Frances S. Gabreski ANGB on Long Island, and Stratton ANGB near Schenectady. All of these locations have large military aircraft, along with civilian aviation components. They are exposed to the same hazards as other firefighters along with those primarily associated with airports including jet fuel, composite aircraft materials, and PFAS from firefighting foams to name a few. All of these exposures have a strong potential to reduce a firefighters life expectancy and their quality of life in retirement. The Governor must recognize this as she recently signed a bill (S4408) granting comparable disability benefits for these same professional firefighters should they be injured or contract an illness in the line of duty.

Our members understand the frustration our DMNA sisters and brothers feel because we were there not long ago. In 1996, we were fortunate enough to get similar legislation passed for retirement benefits and again in 2021 for 207-a disability coverage. Both of these legislative pieces brought benefits to our members that are equal to other career Fire Departments. Benefits like these not only help retain and protect existing members, but also help with the recruitment and retention of future firefighters, ensuring the best candidates remain in positions that typically pay less than surrounding agencies.

We thank all of the State Assembly and Senate members that voted in favor of this legislation. Hopefully the next time this gets delivered to her desk, the Governor will reconsider and give these firefighters a chance for a better retirement.