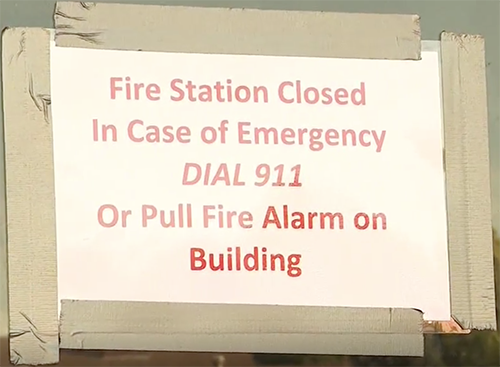 Fifty-six years ago today, Mohawk Airlines Flight 121 crashed upon takeoff at the Rochester Airport, killing 7 people and injuring 36 others. Airport firefighters responded immediately and were able to rescue a number of people from the aircraft with help from other airport workers and outside fire companies. To this day, it remains the worst aviation accident in local history. While many things have changed in both the firefighting and aviation industries, one thing that has not is our members’ reliance on outside agencies in the event of a major disaster. In spite of our constant training to maximize our crews efficiency, with just five on-duty members there is only so much we will be able to do without help from other agencies.

Last night, the City of Rochester implemented the first fire station closure under its “dynamic staffing” plan, which chooses a company to close during the overnight hours, when residents are most at risk. These closures - also known as ‘brownouts’ or ‘firehouse roulette’ - arbitrarily choose a neighborhood to receive reduced protection for a specified period of time. It’s a tactic that hasn’t been used much locally, but has seen tragic results when implemented elsewhere. In Philadelphia, a 12-year-old boy died in 2010 while the closest engine company was ‘browned out’. In 2017, three people were killed in a Holyoke, MA fire in which the closest engine company was closed. In Wilmington, DE, 2016 saw two children and three firefighters killed in the course of eight months. At least two other firefighters were forced to retire due to injuries sustained at a fire. These are just a few of the many stories one can find by briefly searching the internet.

You may recall two major nighttime fires on Monroe Avenue in March of this year - one in which a mayday was declared and both resulting in injuries to several firefighters. Engine 1 on Monroe Avenue was the first company to respond to both of those fires. Engine 1 was also the first company to close under this plan. If either of those fires had occurred last night, the results could have been even more devastating. According to online reports, there were at least six calls that Engine 1 should have been dispatched to overnight that had to be answered by other, more distant companies.

While this may seem to only be an issue for Rochester residents, it is likely to create a ripple effect that also impacts surrounding towns and residents. Many fire departments utilize resource sharing (known as mutual aid or mutual assistance) during large-scale incidents, and high-risk locations - including the Greater Rochester International Airport - utilize automatic aid agreements to ensure adequate manpower and equipment responds to certain types of calls. These types of responses have seen Rochester Fire Department companies responding outside the city, and suburban companies responding within it. With firehouses closing for 14 hours, this could lead to an increase of suburban agencies filling in - potentially leaving their own districts with inadequate protection, and also to a delayed mutual aid response from city companies.

If the closest Rochester Fire Department company had been closed in 1963, it would have resulted in a delayed response at a time when seconds truly mattered. Many of those injured on Mohawk Airlines Flight 121 survived because of the rapid treatment and transport they received, due in part to the outside companies that responded to the airport. With Rochester Fire Department staffing already reduced over the years by ~200 firefighters, and more than half a dozen companies permanently closed, it is imperative to the safety of residents and firefighters alike that all companies remain open and fully staffed.