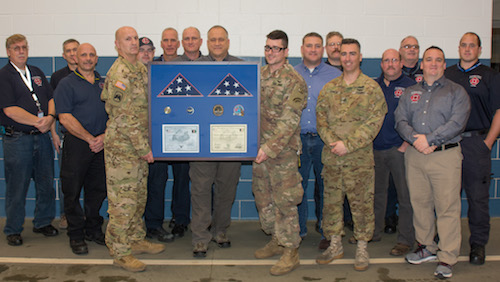 Soldiers from the NY Army National Guard attended this month’s Union meeting to thank our members for the care packages we sent to Afghanistan in 2017. Local 1636 members collected more than 160 pounds of food and hygiene items for the deployed soldiers of B Company, 3rd Battalion, 126th Aviation Regiment that is based at Greater Rochester International Airport. The unit and its CH-47 Chinook helicopters were deployed to multiple locations in Afghanistan to directly support combat operations. The ROC-based soldiers paired up with other soldiers of B Co., 3/126 from Maryland, along with the 7th Battalion, 158th General Support Aviation Battalion out of Kansas to support Operation Freedom’s Sentinel.

To signify the unit’s gratitude, SFC Brian Tenace, SGT Jason Allen, and SGT Mike Landauer presented our members with two framed American flags that were flown during missions in Afghanistan. A Certificate of Authenticity for both flags signed by that mission’s fight crew detailing when and where they were flown, US Army Aviation challenge coins, along with unit and mission patches are also included in the display. One of the flags was flown on September 11, 2017 “in direct support of combat operations in Nangarhar Province, Afghanistan” while the other was flown on September 14th over southern Afghanistan. The soldiers expressed how much the items we sent helped to boost morale during the deployment, and conveyed the significance of the flags they presented to us.

The Firefighters of IAFF Local 1636 would in turn like to express our appreciation for these brave soldiers. The flag display is now mounted in the Airport Fire Station and will serve as a constant source of pride. With nearly half our members being military Veterans, we understand and appreciate the sacrifices made by these service members and their families. We are proud to have been able to support them in this way and hope to continue doing so in the future. 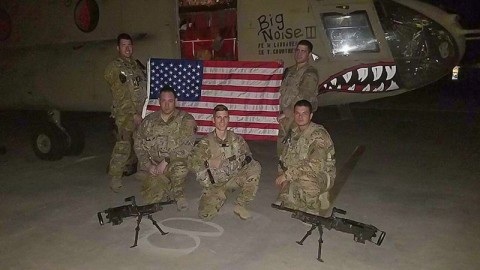 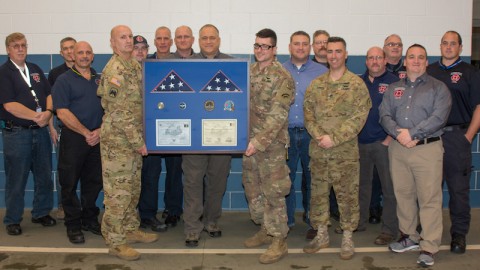 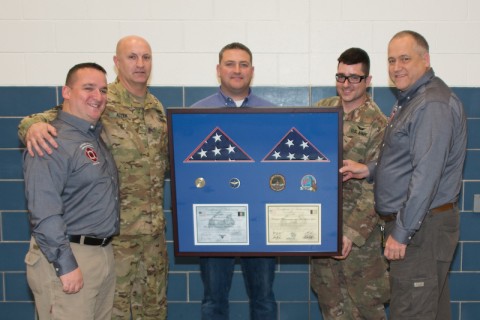 By accepting you will be accessing a service provided by a third-party external to https://iaff1636.com/